O’ahu’s own Peter Shepard Cole explores identity from every angle, using his Hawaiian roots as a through-line to consider the impact of history, development, and change on the island landscape and layering his work with precise painterly realism. While his pieces vary in style and scale, they all draw our attention to the ebbs and flows of the human-ocean connection. Cole has displayed his work at the Honolulu Musuem of Art and SFMOMA, is a lecturer at the University of Hawaii, and has an MFA from the San Francisco Art Institute.

How long have you been an artist? How would you describe your work and your artistic background?

As a child, I always loved to draw and my father introduced me to watercolor painting en plein air.  His identical twin brother, Corny Cole, was a respected animator and well loved teacher at Cal Arts.  Although my uncle lived across the ocean and I rarely saw him, his magnetic enthusiasm for art and his extraordinary talent inspired me to create and to see the life of an artist as a tangible endeavor.

Considering a few of the most influential figures in my education, Faith Ringgold and Raul Guerrero at UCSD and Brett Reichman at SFAI, it is no surprise that I would later find my own art focused upon identity.  All three of those professors create art that is intensely personal in perspective, yet broad in relation to the greater human experience.

Identity is most apparent as a motivation in my figurative paintings, which I began working on while pursuing an MFA at San Francisco Art Institute.  In the first of these, Self Portrait as Captain Cook, I confronted my feelings of guilt related to being a white person raised in Hawaii.  Captain James Cook happened upon the Hawaiian Island Chain in 1778, setting in motion a series of events which would challenge Hawaii’s unique culture and natural environment. 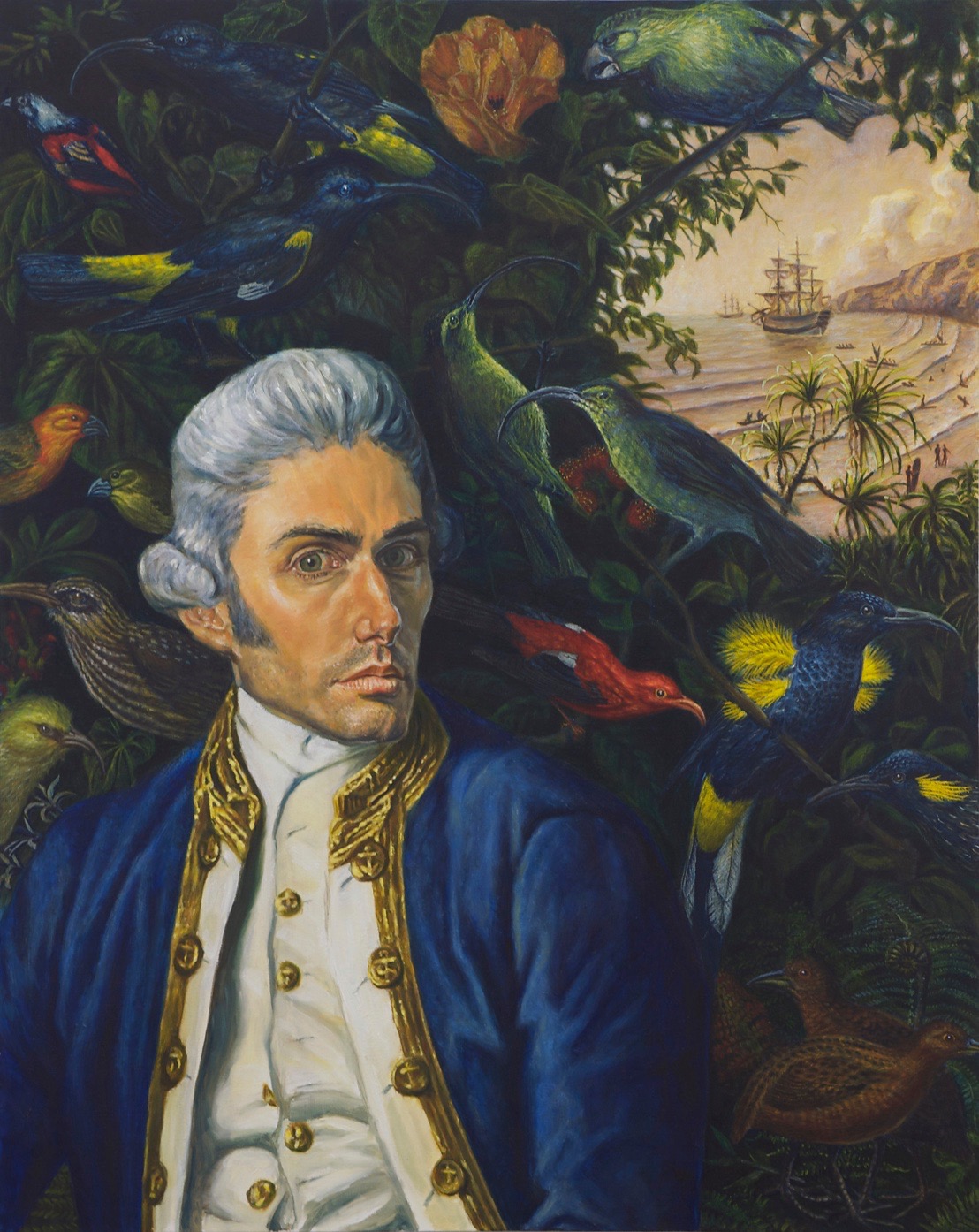 The hybrid culture which evolves when an island community is swept up into a global economy has fascinated me and my Totem paintings are intended to be symbols of such a culture. To create these paintings, I stacked disparate items collected while beach combing on the northernmost point of Oahu where trade winds blast the shore. As with most of my art, the inspiration is close to home and this point happens to be across the street from the public high school I attended. Mass-produced, disposable byproducts of our consumer-based society merge with organic, indigenous objects to form a metaphor for Hawaii’s hybrid culture. In my Totem paintings, everyday objects such as toothbrushes, lighters, and spray bottle tops join with marine detritus to suggest an artifact that could possibly be used in some kind of strange Cargo Cult worship.

Although my seascape paintings lack the literal message of the two bodies of work mentioned above, I consider them to be nonetheless related to my identity.  My Rocky Point paintings are based on the water at the specific spot where my parents live and where I was raised on the North Shore of Oahu.  In my life, this water has been a source of joy, escape, meditation, and the element that I most associate with home.  It has played a big role in shaping who I am.

What sparked your mission to raise awareness through your art? Is there a particular moment or realization that inspired you to focus on the relationship between the natural and built environments?

In this era I don’t think paintings can raise awareness in the way a film like The Cove can.  When artists are lucky, their paintings decorate homes or are hung in museums that most of society isn’t interested in visiting.  That said, I personally love to look at paintings that move me.

The area where I grew up and where I now raise my own children is such a beautiful place partly because community members, like my parents, fought against large development projects and hotel expansions threatening the natural beauty enjoyed by so many, only to benefit a greedy few.

Living on an island, it is obvious just how finite a resource our natural spaces and agricultural land is.  It is a desirable place to live, so the cost of living goes up and the population increases rapidly.  More and more of the successful people I meet work in the construction industry or in real estate.  Growth and development funds our economy and supports the campaigning of our politicians.  It is difficult to see it slowing down.  In our neighborhood I witness more and more illegal vacation rentals popping up where families once lived.

As the demographic shifts, our community begins to feel hollow to me.  I am nostalgic for the North Shore of my childhood. However, the ocean is the same and I strive to paint it full of its strength and character.  I have no desire to paint a domesticated, pretty sea which re-enforces the fantasy of a tropical utopia envisioned by developers, nor do I wish to paint the perfect wave which caters to the egotistical surfer’s desire for conquest.  I want to paint a sea which is greater than all of us, both dangerous and beautiful.  The sublime experience of the sea can provide a momentary escape from the limitations of our human concerns.

What’s your process like? How do you find inspiration, how long does a piece take, and when do you determine it’s complete? Where is your work displayed?

My Rocky Point seascape paintings begin with swimming around in the rip current, wearing my fins and snapping away with a small digital camera.  I take thousands of pictures, most horrible, but going through the photos later I find some with strong compositions.  I am attracted to what I perceive as interesting action, where water is pulling in opposite directions.  Perhaps the current is churning after a wave passed, or backwash off the reef is warping the face of a wave, contorting its own sense of order. 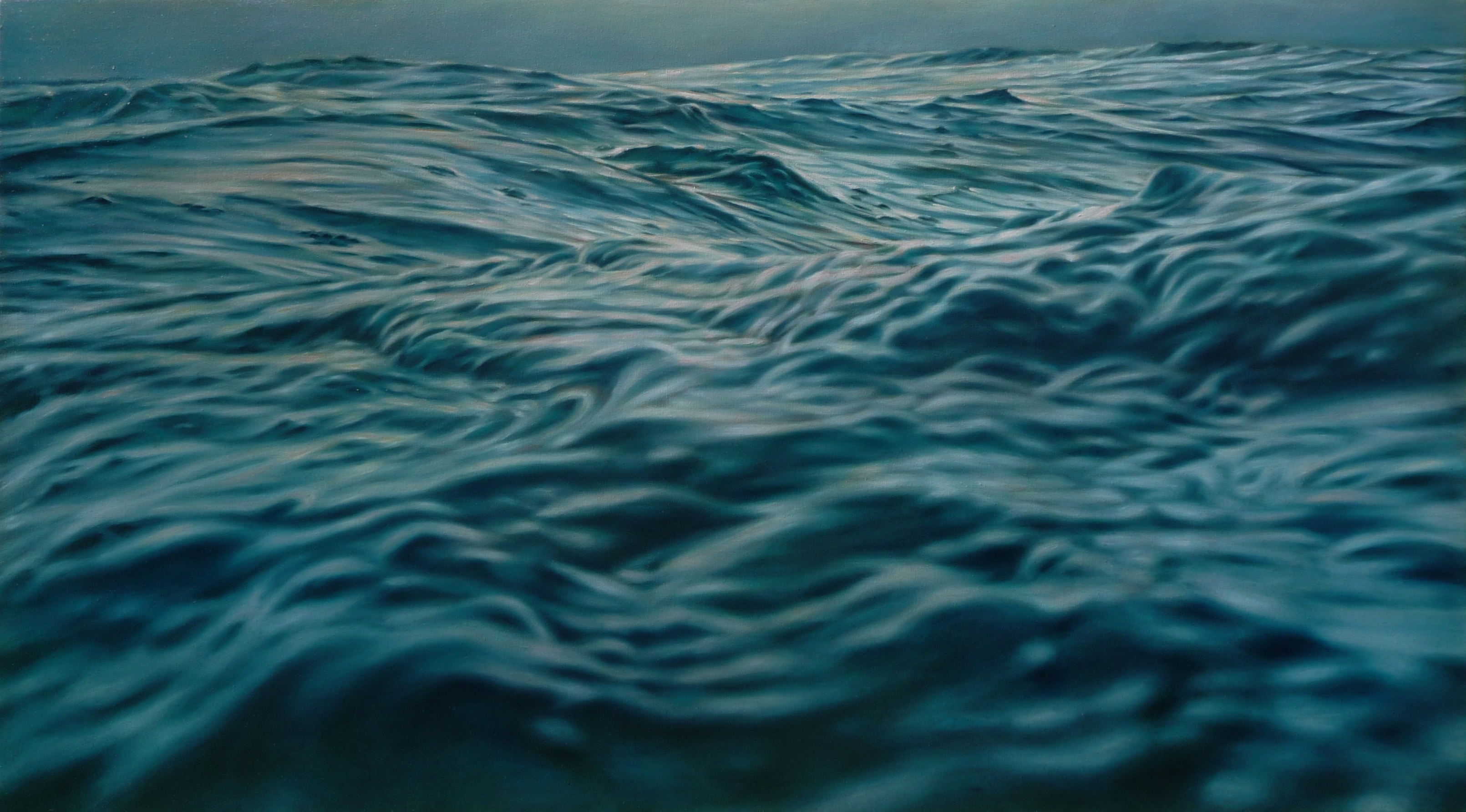 Once I have selected an image I begin painting with a large brush in a loose manner.  I use a lot of solvent to keep things fluid, so that I can easily move the paint around and not feel stuck. There is a physicality to the brush strokes, my actions mimicking the movement of the water. Once I am pleased with how I have mapped things out in this transparent wash, I begin applying warm, opaque highlights into the wet paint.  To capitalize on the fluidity of wet on wet painting, my first day working is usually a long one.

After this first layer is dry, I develop details and adjust features to my liking.  I find that too many details make a seascape painting stiff and stagnant, as if the artist has gotten caught up in the detail and lost the overall rhythm.  Glazes, or thin layers of paint diluted by solvents, are applied over dry paint to darken areas, or change the tint of an area.  I don’t have a methodical way of approaching these adjustments.  It’s more a series of problem solving efforts until I am satisfied and can step away from the painting.  Some paintings take a long time to complete, while others don’t take as long.  If a painting sticks around, I might later find something I want to change.  Large paintings can take me a few months to finish.

What is one of the most memorable experiences of your professional career as an artist and ocean/environmental advocate?

In 2004, I had returned to Hawaii after living in New York for six years.  I went on a walk with my girlfriend, who later became my wife, along an eight mile stretch of remote coastline at the northernmost tip of Oahu.  It was interesting to be so close to the international spectacle of the North Shore, however to not meet another soul, nor see any architecture.  The one perverse sign of civilization meandering across our otherwise pristine surroundings was the blue, pink and white specked trail of plastic detritus marking the high tide line upon the golden sand.

We collected the remains of plastic toothbrushes, lighters, spray bottle tops, action figures, fishing floats, combs, and bottle caps.  Encrusted with coral and marked with foreign writing, they seemed like artifacts from various Pacific Rim civilizations. The act of collecting, like anthropologists, provided a bizarre perspective on the priorities and values of our global culture. 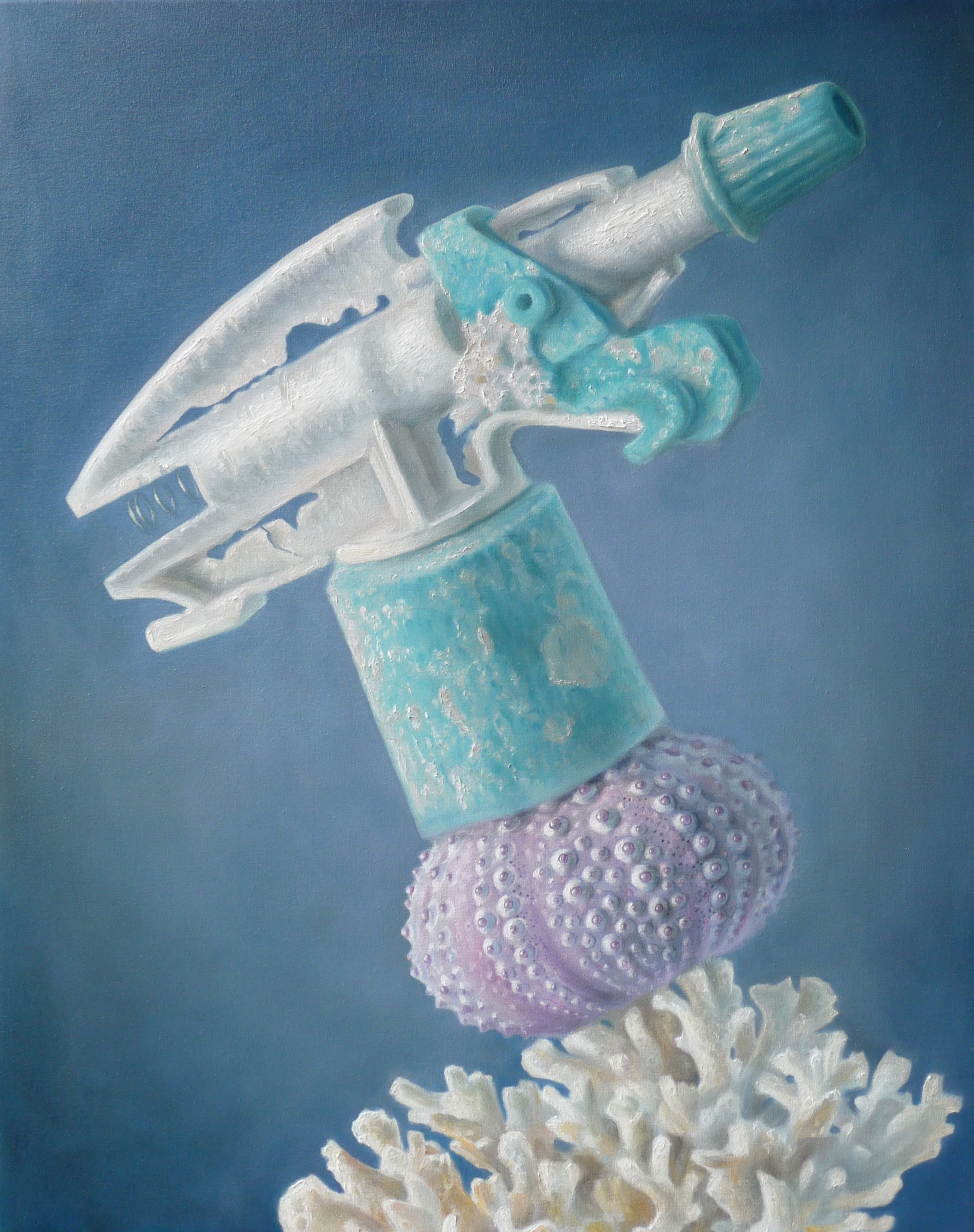 It also offered a glimpse at how these ocean currents connect seemingly isolated lands. An early example of this phenomena was encountered by Captain Cook upon first contact with Hawaiians on Kauai in January of 1778.  The English sailors were perplexed by the Hawaiians’ familiarity with and desire for iron, despite the fact that they didn’t mine it themselves. In fact, the people of Kauai had two pieces of iron they had collected from the eastern shore, which is the windward side of the island, bombarded by relentless trade winds. The iron was probably carried in on flotsam or jetsam from one of the many Spanish ships which had been sailing the North Pacific for over two centuries.

A few weeks after our beach walk, the objects we had collected were laid out on a picnic table on my parents’ deck and we were beginning work arranging them in a large mosaic.  We were surprised when a neighbor brought by his friend Julian Schnabel, the artist who became famous for his paintings on broken plates in the 1980s. He didn’t seem very impressed by what we were making, but he stacked three of the objects and said that I should paint them much larger than their actual size.  At first I didn’t want to do what he said, but later I took his idea.

What draws you to the oceans, specifically?

Now having young children and seeing the innate draw of the sea in them, seeing how being in the water both exhilarates their senses and calms their spirits, I gain greater appreciation for the ocean’s power over us.  It is such a special feeling to take them into the shore break and tide pools that I played in as a child.

What reaction would you like people to have to your work – and what message do you want them to take away?

A year ago, a docent at the Honolulu Museum of Art told me that looking at a seascape painting of mine made her seasick.  Reactions that don’t necessarily sound positive are still evidence of individuals taking the time to look at my paintings and opening themselves up to being affected by them.  In this media-frenzied world, in which we are oversaturated by so many images, artists are fortunate if their work has any effect on a viewer.

It is scary to think about all the junk that ends up in the ocean.  The way we treat the Earth in general is horrifying.  If any painting of mine can be a part of an environmental dialogue, I consider that a huge honor.  I have such respect and admiration for people like my brother who work so hard to make this world a better place. Please check out the North Shore Community Land Trust website to learn more.